DEPARTMENT OF HISTORY EDUCATION_WELCOME MESSAGE FROM THE HOD

I wish to welcome everyone to the beginning of the 2017/2018 academic year as the Department of History Education (DHE) of the University of Education, Winneba enters  a new era. The time ahead look challenging but also promises new and exciting changes to the Department.

I wish to pay  tribute to the former H.O.D for all that he was able to do and to express my appreciation for his efforts in building the Department of History Education almost from the scratch as its foundation H.O.D.

As the second H.O.D of the Department of History Education, I have no doubt that the task ahead, that is, continuing the process of building the Department is something that I must address myself to. In this, there should be nothing short of producing results. I have duly received the baton of office to run this relay. This new era shall be premised upon principled decisions and the shunning of arbitrariness in decision making at the Department of History Education (DHE). I have consistently told my students that emotions have no place in the hallowed arena of academia. In my well-received 2015 book, Beyond the Lecture Hall: What University Students Do Not Hear at Lectures, I said that in the conflict between what is proper and what would bring the right result to oneself, one must always be disciplined and do what is proper. I wish to add here that even if you do not like someone, consider the good contributions they have made and give them their due. Do unto others what you want others to do unto you is not too much to ask for. After all, we have a common humanity. In making the choice to be disciplined and do what is proper, everyone must be given his or her due.

A message that circulated on social media partly read,

“No Matter what you say and how you say it, SOME people will never get it. That is not your fault!

“No matter how pure your intentions are, SOMEBODY will accuse you of ill-intentions. Stay pure anyway.

“No matter how humble you are, SOMEBODY will still consider you proud. Stay humble anyway.

“Some of your greatest disappointments will come from those you gave your best appointments or commitments.

“Sometimes, some of the worst things you will hear about yourself may come from those you speak best of.

“Sometimes doing the right thing ends up making you look like a fool”.

The import of this long quote is that you should not sacrifice your values on the altar of expediency. If you do, it would haunt you in future. There are many who, as a result of not standing for something, fall for anything. Such people lead their lives as if there is no future. The way to go is to stay principled no matter the costs. Nothing is worth believing unless it is worth dying for. If what you believe is not worth dying for, change your beliefs.

Self- belief is an important indicator of maturity. When one comes of age, one develops the mechanisms to depend on oneself with the consciousness that the ultimate responsibility both starts and ends with oneself. This also applies to the African. One of the biggest challenges to the black African is the color of his or her skin attendant upon a baseless yet endemic belief that he or she is inferior to other races of the world. Unproven as this belief has remained, it has put and continues to put an unnecessarily enormous pressure on the black African. When he wants to be outstanding, he has to do at least a double of what his or her non-black colleague or counterpart would do. This is as true in Africa as it is outside of Africa. Often, the black person is a double agony sufferer. He suffers racial discrimination when he is outside Africa and he suffers ethnic discrimination when he is inside Africa. The non-black does not see him from a position of racial equality. At the same time, his black compatriot also does not want to see him from a position of ethnic equality. Self-belief, which is an important indicator of maturity, is what sets the African apart and becomes the game-changer. If you do not believe in yourself, nobody will believe in you. Everyone must accept the challenge to believe in themselves no matter what it takes and the costs involved.

The teaching of history as an academic discipline at UEW has come a long way. From the first batch of our History students who graduated in 2009 in the former Department of Social Science Education to our ninth batch who would be graduating in the last quarter of 2017, a lot of changes have been introduced with the aim of improving the quality of the experiences that our students go through. A lot more positive leadership is on its way.

I have gladly accepted my appointment, the responsibilities and the privileges of the office. Many experiences in my upbringing, my discipleship as a Christian believer in the Lord Jesus Christ as well as my career as an academic convinces me that God wants this new office to be one of the experiences of my life. I believe also that he wants it at this particular point in time. That is why against all the odds, the lines have fallen unto me. I believe also that God has sufficiently prepared me for a time like this. Like Mary, the Virgin mother of Jesus Christ in the Bible, I say, “Behold, I am the handmaid of the Lord. May it be done to me according to your word” (Luke1:38). Thank you.

Our approach to history has been conceptualized to be more analytic and more thematic.  We realize that very few (if any) employers want someone who can recite the factors that led to a particular historical event.  Rather, employers in schools and elsewhere are looking for someone who can:

These are the skills of today’s information age, and these are the skills that the Department of History Education aims to achieve in its students.  The thematic approach will aim to prepare our students to be active agents of change in schools and beyond.  Great history teachers do not simply know more facts than their students.  Great history teachers are historians who know how to ask questions, expand their interests, investigate into issues, and engage in change. 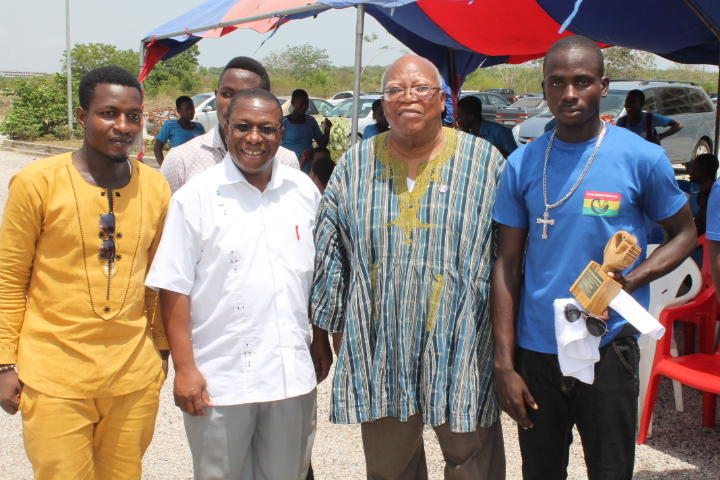 With a highly competent cadre of lecturers the department is forging a new vision, a new approach, and a new outlook on studying history at the University of Education, Winneba.

To become a progressive, internationally acclaimed centre for the study of History that provides cutting edge teaching, learning and research to prepare great History educators and other professionals.

To prepare History teachers for all levels of education as well as conduct historical research, engage in deep analytical thinking, disseminate knowledge and lead the quest in promoting the study of History both as a discipline and a guide for life.