Chairperson of TEWU-UEW Hands over

The Chairperson of the Teachers and Educational Workers Union, University of Education, Winneba Chapter (TEWU-UEW), Sis. Theresa Ackon, who is set to retire from active service on 30th September, 2021, has handed over to the Vice-Chairman, Bro. Ebenezer Ofori Atta in accord with the Union’s constitution.

Sis. Theresa Ackon was voted into power in July, 2018 to serve a four-year term but has to retire per her age and the Labour Act from the service of the University and consequently her ineligibility to serve the additional year of her term. 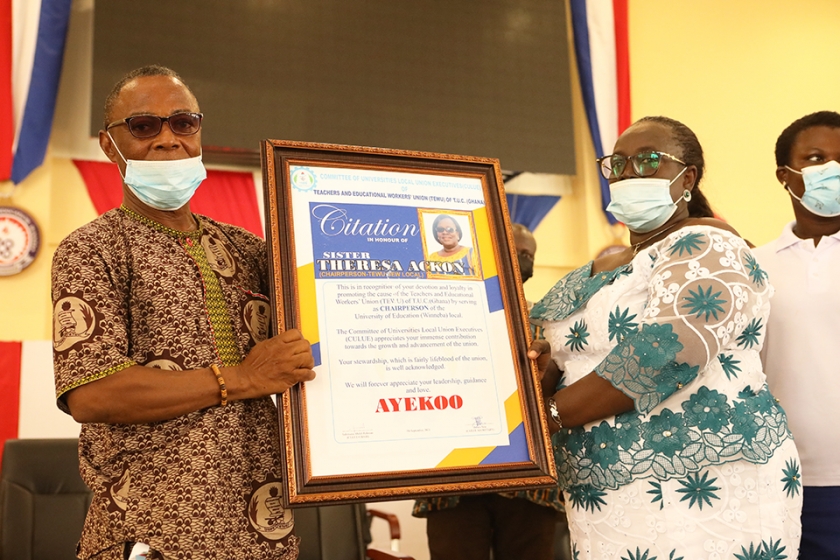 Sis. Theresa Ackon being presented with a citation for her meritorious service to TEWU and UEW

Speaking on behalf of the Registrar, Surv. Paul Osei-Barima Esq., the Deputy Registrar, Division of Operations, Mr. Alexander W. Essah complimented Sis. Theresa Ackon for the good work, benevolence and massive support she offered to the University and TEWU-UEW in the past seven years of her regime.

“TEWU-UEW has been a great support to the University and Management is very grateful. On behalf of Management, we want to congratulate you and your executives for the tremendous work you have done for the University over the years,” he noted. 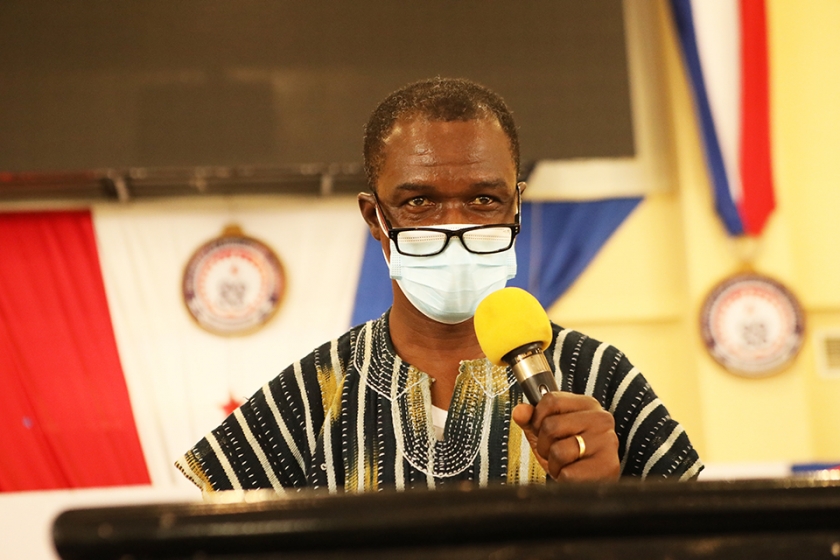 Deputy Registrar, Division of Operations, Mr. Alexander W. Essah commending Sis. Ackon and her executives for the great work done during her time in office

In her farewell speech, Sis. Theresa Ackon, expressed her excitement and gratitude for the honour and the many opportunities the University gave her throughout her active service. She thanked Management and her colleagues for their extraordinary support throughout her journey in leadership.

“I have truly enjoyed working for TEWU-UEW local and I sincerely appreciate the support given me during my seven years as part of the Union. I trust that the friendship I have developed here will last well into the future,” she remarked.

She further thanked her comrades for making the otherwise herculean work an easy one. She pleaded with them to give the newly appointed Chairperson and his executives the same amount of support they had extended to her. She promised to be of help whenever she was needed. 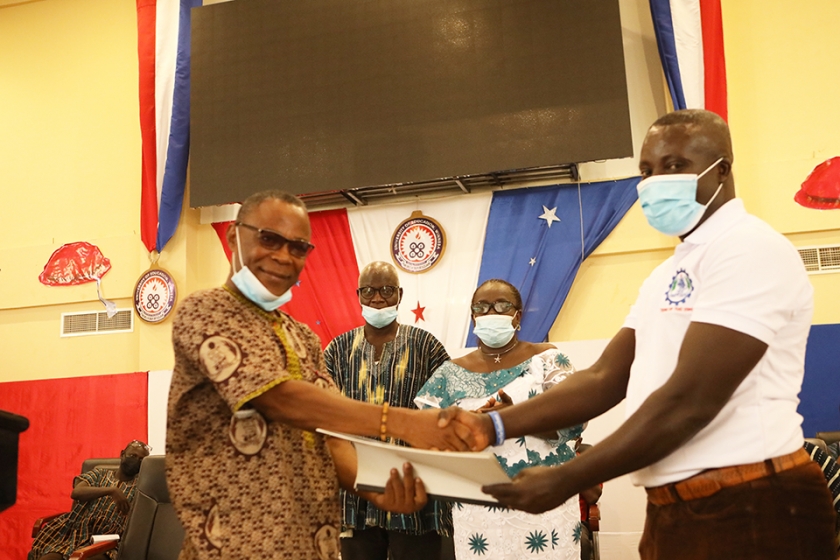 Accepting the honour to take over the position, Bro. Ofori Atta, thanked TEWU National and the Regional Executives for giving him such an opportunity. He promised to continue the sterling performance under the leadership of Sis. Theresa Ackon. He further assured Management and comrades that during his tenure of office, he would ensure continuous mutual relationships.

Bro. Ofori Atta appealed to comrades for support and implored them to make punctuality and honesty their cardinal work attitude.

“As you are working you might think no one is watching but we see what everybody does. When the right time comes, Management will reward everybody in terms of their good works,” he said. 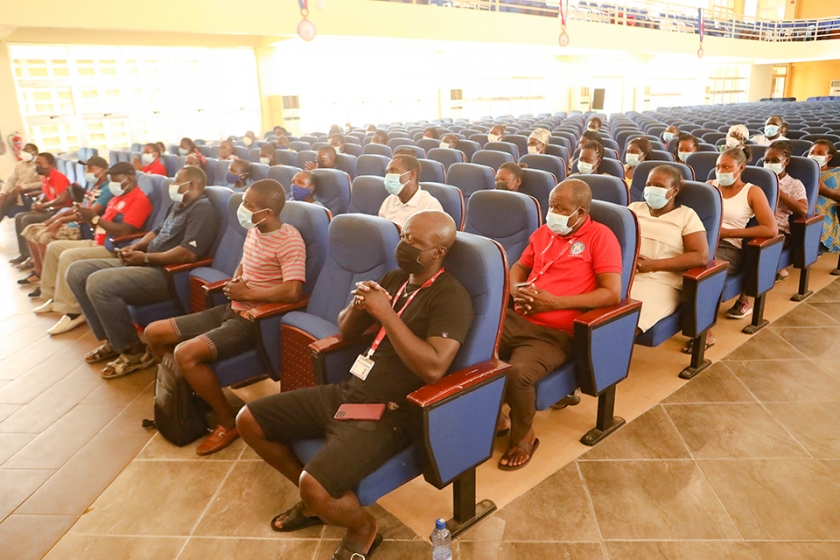 The Central Regional Industrial Relations Officer (IRO), Bro. Jonathan Kofi Ampa-Korsah, who anchored the handing over, implored Bro. Ofori Atta to follow in the footsteps of his predecessor.

He also entreated him to be circumspect and consider all sides of the issue when faced with any challenge and commended Sis. Theresa Ackon for the tremendous work done under her tenure. 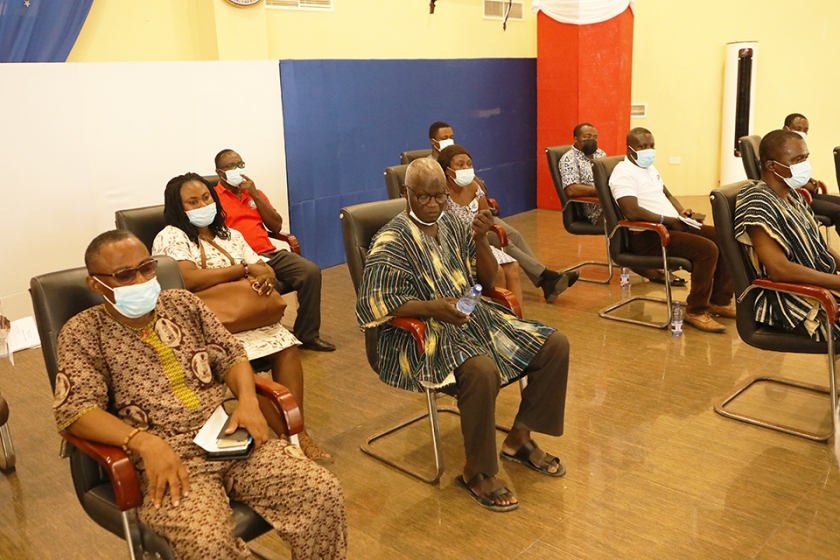 Some invited guests, staff and TEWU representatives from sister institutions who graced the occassion 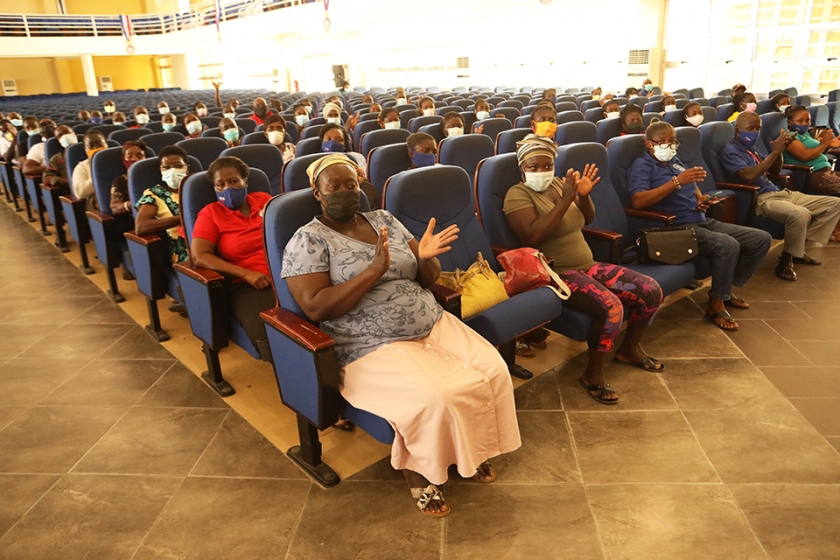