UEW, Ajumako Campus to get a Water Production Factory

The Water Production Factory project, initially to be constructed at North Campus, Winneba was moved eventually to Ajumako due to the salty nature of the land at Winneba. The relocation of the project to Ajumako functions as a way of improving activities in the town.

The Water Production Factory will be an income generating venture for the University and expand the University’s employment capacity as well.

Presenting the project on behalf of Management to the contractor, the Ag. Director, Physical Works and Development, Arc. Kwame K. Danso indicated that the plant would produce both bottled and sachet water for both the University community and the general public on commercial basis. He disclosed that the six months project is expected to contain Offices, Laboratory, Cafeteria, Storage Silt Point and the main Production Hall. 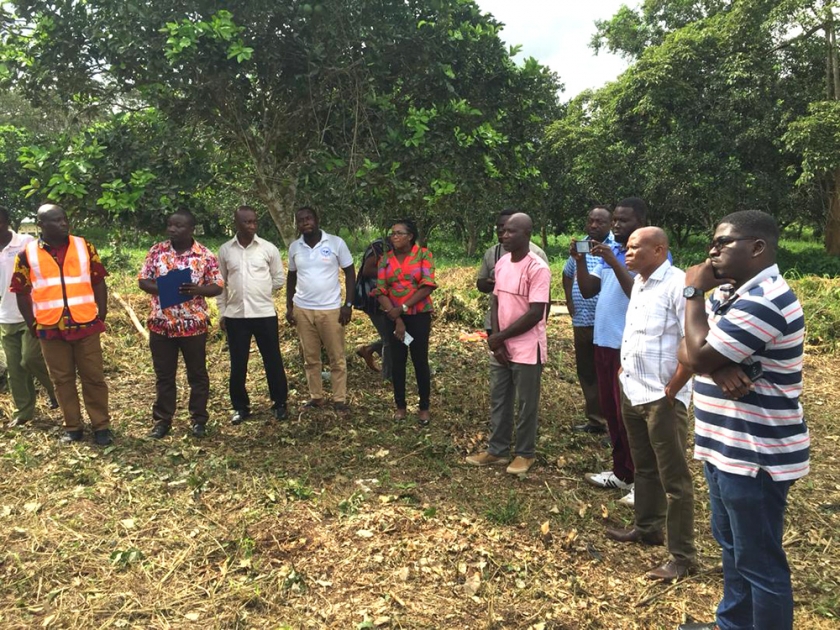 The team at the project site

The Project Manageress, Arc. Akua Cofie stressed on her readiness to work hard with the Contractors. She announced that the project would be executed according to the plans handed over to the contractor.

In his Remarks, the Dean, Faculty of Ghanaian Languages Education, Dr. Charles Owu-Ewie commended the team that worked to bring the idea and resources together. He noted that most contractors fail to complete projects on scheduled time and therefore admonished the contractors to do a good job by completing on time.

Head of Finance, Commercialised Unit, Finance Office, Mr. Joseph Owiredu in his presentation stated that, the period of relying on government funding had elapsed, it was therefore important to introduce such an initiative to generate more funds to support University activities. 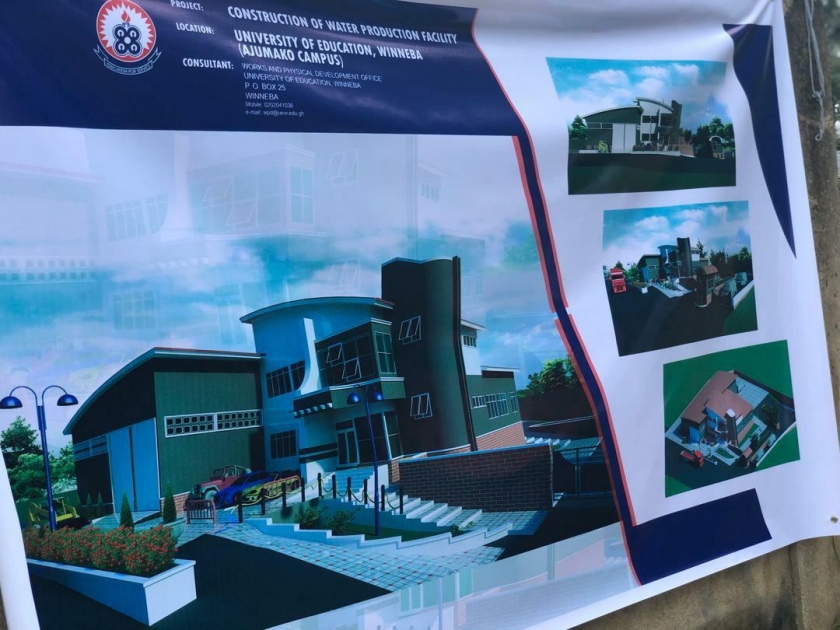 An Architectural Drawing of the Water Production Factory

Management also used the occasion to inspect the construction of the Ajumako Campus fence wall. The contract, awarded to Amonu Bonsu Company Limited has seen the completion of phase one. Therefore, Arc. Danso, on behalf of Management took the opportunity to thank Mr. Ernest Bonsu of Amonu Bonsu Limited and Clerk of Works, Ajumako Campus, Mr. John Afriyie Mensah. However, the Water Production Factory Project is awarded to Blessedfield Constructions.

In a meeting with Chiefs and Stakeholders held on Friday, 12th October, 2018 at Ajumako, the Vice-Chancellor, Rev. Fr. Prof. Anthony Afful-Broni assured stakeholders that his administration had come to serve and the Water Production Factory was an evidence of his vision and mission for the community.

Rev. Fr. Prof. Afful-Broni promised to provide unlimited internet access to the Ghana Education Service Office at Ajumako and extend it to the Ajumako Police Station before Christmas. He pledged he would ensure Management of UEW supports the community in its festival and farmers’ day celebrations.

The Chiefs and Stakeholders present expressed joy and thanked Management of the University for the kind gesture. They vowed to support the Vice-Chancellor and his abled lieutenants in all legal means to execute their tasks.

A group photograph after the Chiefs and Stakeholders meeting at Ajumako