Management of the University of Education, Winneba (UEW) and a delegation from the General Headquarters of the Ghana Armed Forces (GAF) have signed a Memorandum of Understanding (MoU) at the Council Chamber of UEW on Tuesday, 28th September, 2021.

The MoU gives UEW the green light to establish a Study Centre at the Ghana Military Academy and Training School, Accra-Teshie, to train military officers for their professional and personal development.

In this regard, UEW is expected to design and offer some market-driven contemporary security-conscious programmes to arm security officers in the country as well as help fortify the nation’s security services.

The Vice-Chancellor of UEW, Rev. Fr. Prof. Anthony Afful-Broni, in his remarks at the signing of the agreement, described the agreement as one of the biggest under his tenure of office.

He emphasised that the GAF delegation’s visit to UEW ascertained that UEW had come a long way. “It shows that you in the Ghana Armed Forces attach such great importance to the relationship that you want to have with us. Otherwise, you wouldn’t bring such top-notch members of your community, Director of Training, Deputy Director of Training, the Head of Education and several tutors in the education programme.” 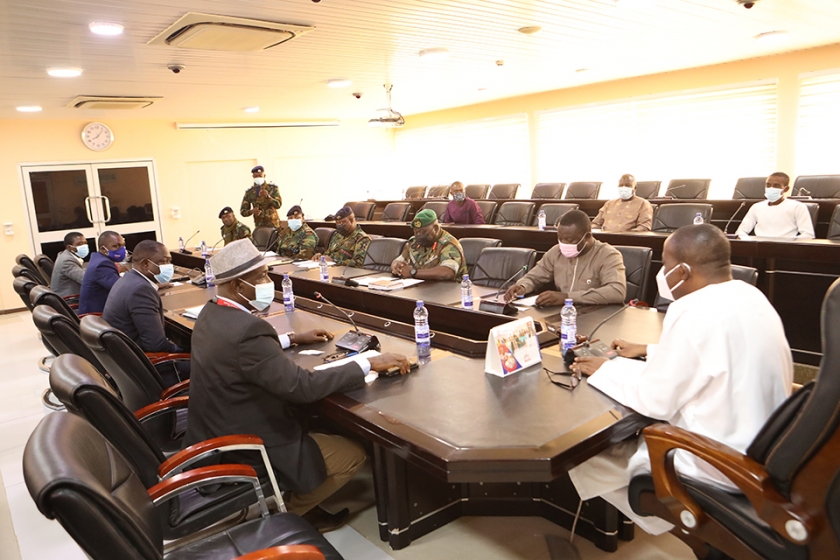 Rev. Fr. Prof. Anthony Afful-Broni (right) during deliberations with the team from GAF

Rev. Fr. Prof. Afful-Broni projected, “It’s very enlightening to see that the Ghana Armed Forces has chosen to go not to Legon (the University of Ghana), not to UPSA, not to GIMPA while all these big very prestigious universities are nearer to them but chose to come all the way to the University of Education, Winneba. It tells Ghana, it tells the world that UEW has come a long way and UEW has a lot to offer and we probably do not make enough noise about what it is we do”.

The Vice-Chancellor averred, “When it comes to education, this is the place to be. We will let the world know that you have come of age, we have come of age and we want to establish a very beautiful relationship that we believe will last a very long time”.

The Principal, College of Distance and e-Learning (CoDeL), UEW, Prof. Francis Owusu Mensah, in revealing the purpose for the meeting on behalf of the Registrar, Surv. Paul Osei-Barima Esq., stated that the signing of the MoU would be the guiding principle, guiding document and guiding philosophy underlying the kind of interaction both institutions were going to have. “Today, we’ve arrived at our destination on a journey that we started some months ago with initial expression of interest to partner the Ghana Armed Forces to provide further education for the staff which we embraced. After series of fruitful interactions, today is going to mark the formal signing of the Memorandum of Understanding,” Prof. Owusu Mensah asserted.

The Director-General of the Department of Training at the General Headquarters of GAF, Brigadier General Twum Ampofo-Gyekye, on his part, extended warm compliments from the Chief of Defence Staff, Vice Admiral Seth Amoama and the entire GAF to the Management of UEW. 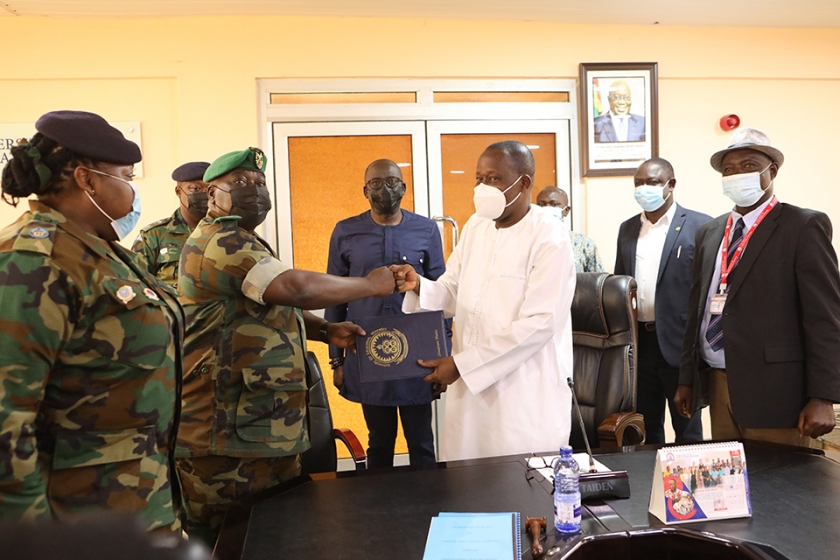 He revealed that the Chief of Defence Staff wished to have been at the signing of the all-encompassing MoU personally. However, “he is precluded from doing so by other equally important commitments and he asked me to convey his felicitations to you and everyone.”

Brigadier General Ampofo-Gyekye indicated that partnerships between institutions just like friendships between individuals were built on shared values and there could be no doubts that UEW and GAF share important values in the professional execution of institutional mandates. “At the end of it both, we all seek to serve humanity. Consequently, the signing of this agreement is an expression of the friendship affinity that exists between us to bring us together to pursue knowledge, improve quality of life and then enhance the value of diversity.” 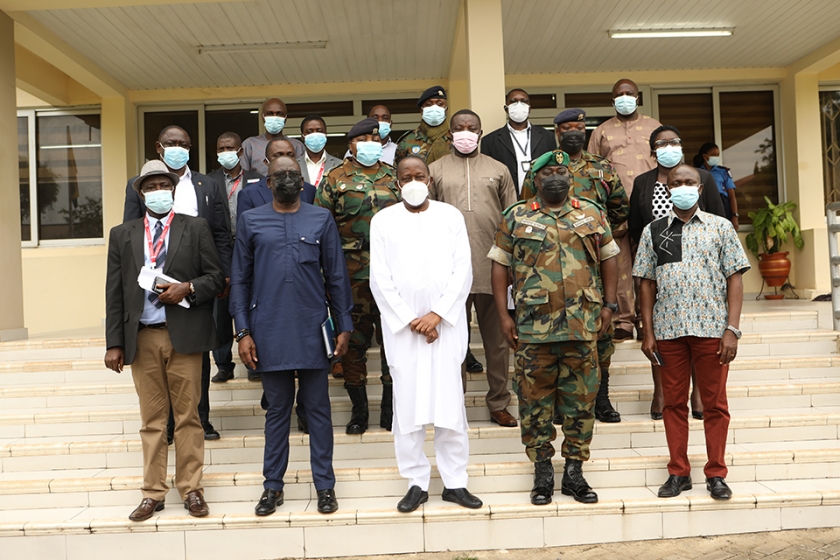 He pointed out that the ceremony was not only an excellent example of the strength of the cooperation between both parties adding, it was also a clear indication that the two institutions were committed to the development of human resource in general.

“This is what I think is the beginning of what I believe is going to be a long term partnership which we believe fervently will grow from strength to strength. It is a huge incentive as it aims to strengthen our collaboration in the areas of training and capacity building. We hope we would all put ourselves in a position where we can implement what we signed in the MoU so that we can attain the full benefits of what we seek to achieve,” he said.

As charitable as UEW always, the Head of Department, University Relations Office and Media, Dr. Obaapanin Oforiwaa Adu presented an enhanced hamper on behalf of UEW and Management to the GAF delegation. 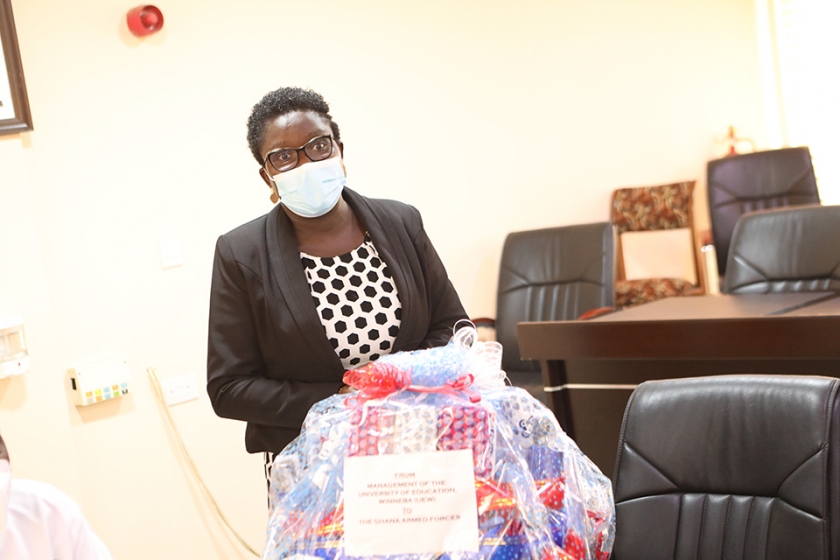 Dr. Obaapanin Oforiwaa presenting the items to GAF on behalf of the University 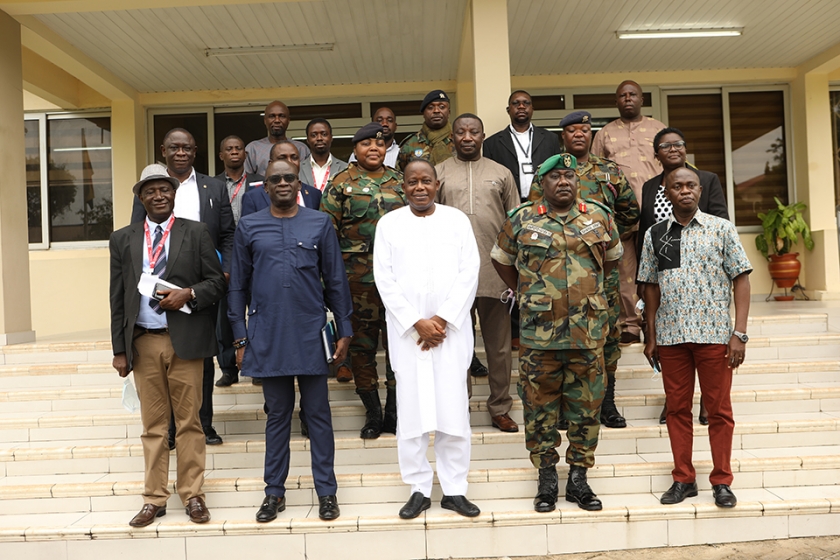